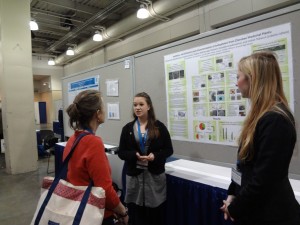 Senior Erika Williams spoke with other attendees of the AJAS conference. Photo by Mary Arnaudin

Early on the morning of Wednesday, February 13, a small group from Brevard High School embarked on a five day academic journey to Boston. Seniors Erika Williams, Kaitlin McCreery and Kris Petterson won the all-expenses-paid trip to the American Junior Academy of Science Conference after each of their science research projects won first place at the North Carolina Student Academy of Science (NCSAS) competition in March 2012. 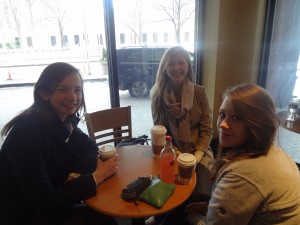 From left: Kaitlin McCreery, Kris Petterson, and Erika Williams enjoy a rare brake during the conference. Photo by Jennifer Williams

McCreery won first place at NCSAS in the Advanced Biological Sciences category for her research on “Bd” fungus, which infects frogs and has caused population declines on six continents. She discovered that the chytrid fungus uses chemical communication to regulate reproduction. Her discovery helped advance knowledge of the fungus, and may help treat infected frogs in captivity.

Williams and Petterson, who, along with sophomore Meredith Tooley, completed a project that won first place at NCSAS in the High School Biological Sciences category. They isolated endophytes, which are bacteria and fungi living inside and around the cell walls of plants, and tested them for bioactive compounds that are commonly used for pharmaceutical practices. Their work advanced the field of science because bioactive compounds can be mass produced cheaply and easily for medical use.

Although the event was not a competition, it was a completely different kind of academic experience. They met and shared their research with successful student scientists from all around the country (47 states were represented). The students heard lectures and had conversations with countless national and international doctoral research scientists and professors. According to McCreery, the conference heavily emphasized the noncompetitive side of science research, which is important because of the competitive atmosphere that high school science competitions foster. 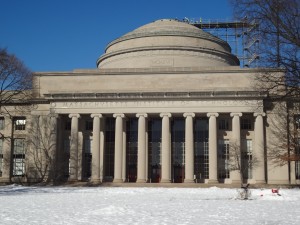 Participants got to tour science research labs at the Massachusetts Institute of Technology. Photo by Erika Williams

The students’ days were jam-packed, but the three students summarized a few highlights. They had the chance to tour various research labs at the Massachusetts Institute of Technology (MIT), one of world’s most renowned science research institutions. They chose the labs they toured; some picked the microbiology and cancer labs while others picked the electrical engineering and artificial intelligence labs. There, they learned about the latest innovations in the fields of robotics, clean energy, and cancer treatment.

McCreery’s favorite event was called Breakfast With Scientists, which took place at Northeastern University. McCreery, who talked at great length with a physics professor from MIT, said that participants spoke with top scientists about their professional lives, their experiences in the field of science, and even a few jokes. Discussing the experience, Petterson said, “I had the honor of speaking with Dr. Graham Walker, a contributing scientist to the American Cancer Society, and the head of undergraduate biology research at MIT. During our time together he told me of his current research as well as his love for organic chemistry that shifted into a Ph.D. in biology so many years later.” 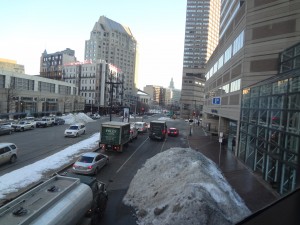 Despite heavy snow, the participants were able to arrive and depart on time and attend all scheduled activities. Photo by Erika Williams

Erika Williams said her favorite part of the conference was “getting to meet other people interested in science and learning new topics about science that I wouldn’t have learned.”

McCreery said, “I learned that science is a lot about creativity. It is not all about memorizing and regurgitating facts, but that it is all about perspective. Scientists who are the most creative end up learning the most and becoming the most successful in their field.”

Students had the opportunity to share their winning projects with other students and professional scientists, which provided opportunities for learning and growth.

Participants flew home not only with an expanded scientific understanding but also with a greater sense of the possibilities that the field has to offer. Williams said, “It’s not as hard to achieve what you really want to do in science as people often think.”

McCreery also said she learned it is important to “be creative with life decisions. There is a really high demand for science jobs, and if you just work hard, you can find the job of your dreams.”