by Nyx Siniard and Hannah Dickson 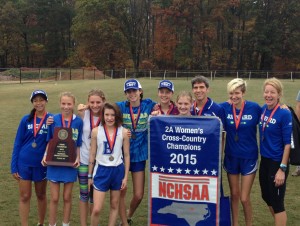 The 2015 BHS Women’s Cross Country team at State with their trophy.

The women’s cross country team won the state title for 2A schools in 2015. The last time they had taken a state title was in 2001. The question is: do they have what it takes to win again?

The whole cross country team, including the men, were excited when the women’s team won. The team did well despite the weather.

“It was muddy and wet and drizzling rain, and there were giant puddles of water that went up to your ankles,” said Lillie Siniard, sophomore and cross country team member. 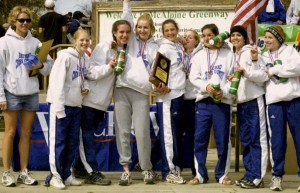 So far the team has not taken first place as at any of their meets this year, but they have beaten larger 3A, 4A, and 5A schools. They have also beaten T.C. Roberson, a school they had not beaten in more than 20 years.

Can they take state again?

“I think we have a chance if everybody is on their A game and feeling great, and we have good weather conditions,” said junior Ava Findlay.

“No one seems to be as fast as I am,” said Graham.

The team hopes they can prove Graham’s and Findlay’s predictions right.