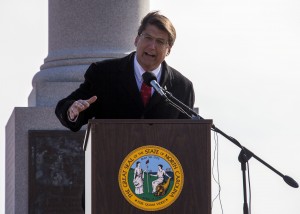 by Cassie Bradley and Katelyn McCarson

House Bill 2 is currently a “hot button” topic and the source of a lot of controversy in North Carolina. The bill, also dubbed “The Bathroom Law,” has been widely debated, as it states that one must use the restroom that aligns with the gender on their birth certificate. This creates difficulties within the transgender community, especially when acceptance is already a challenge in society.

Most people are only informed about HB2 in regards to the bathroom issue, knowing very little of the rest of it. HB2 not only eliminated the right to use the restroom that aligns with one’s identified gender, but also it restricted the North Carolina General Assembly’s ability to enact policies on family leave, child welfare, and health insurance standards. Furthermore, it restricts local governments from enacting minimum wage standards.

Along with all of these hidden clauses that have gone widely unnoticed by the public, HB2 automatically overturns any legal claim of discrimination based on sexuality, religion, gender, or race that might be brought to a state court.

“As a black woman who follows Islam, I feel like the prevention of this law would benefit most of the state, especially since America is such a diverse country, and North Carolina is such a diverse state,” said senior Zaria Abdulkarim. “If we have this bill, then it’s not really going to take us anywhere good.”

The law has also proven costly to North Carolina. HB2 has cost the state at least $176,000 in legal fees, and $87.7 million from business boycotts, according to Center for American Progress, a liberal think tank. These businesses include the NBA, PayPal, Deutsche Bank, and the Atlantic Coastal Conference. All of these businesses have either cancelled plans to expand their business in North Carolina, or they have cancelled major events held in the state.

Even musicians are taking a stand. Big names in the music industry, including Demi Lovato, Nick Jonas, and Bruce Springsteen have cancelled performances in North Carolina. Others, including Jimmy Buffett and the Coral Reefers, have played in North Carolina, but they are refusing to plan future concerts in the area if the law stays in place.

Many have taken a strong stance in opposition to the law, including presidential candidate Hillary Clinton.

“This is where bigotry leads, and we can’t afford it,” said Clinton.

A comic book store in Winston-Salem has chosen an alternative form of protest against the bill. Ssalefish Comics has been promoting a new comic, “Alters”, which is the product of a team of differing gender identities, ethnic backgrounds, and sexual orientations and features a transgender superhero.

However, according to KeepNCSafe.org, a total of 401 organizations remain publicly in support of the bill. As of April 19, 334 organizations have signed a letter thanking Governor Pat McCrory and the General Assembly for “passing a law affirming the privacy and safety of businesses, women, and children to live and work in accordance with their deeply held beliefs.”

The NC Safe Coalition defended claims against the financial repercussions of HB2 in an article.

“North Carolina is consistently one of the top five states in the nation for business and economic growth,” their website states. “Any businesses threatening to not do business in our great state based on dishonest attacks by opponents of women’s and girls’ privacy and safety are only hurting themselves…It would be a shame for any companies to miss out on that simply because they believe men should be allowed into locked rooms with girls and women.”

In August, Governor Pat McCrory, a large influence on the passing of HB2, sat down with news company ABC 11 to discuss the events that have conspired lately due to the bill.

“It’s a respectful disagreement but it’s not a disagreement I should be disrespected for having,” McCrory said.

Recently, the repeal of HB2 has been in heavy discussion as the U.S. Supreme Court rules whether or not it is a constitutional addition to the North Carolina State law.

“I think revoking HB2 would probably be the best course of action as of now,” junior Declan Lusk said. “I think we owe [the LGBTQ+ community] more respect.”

The Supreme Court trial on the constitutionality of HB2 is now in delay, due to a pending case on transgender bathroom laws in Virginia. The case is expected to reopen in early 2018.