by Nyx Sinard and Hannah Dickson 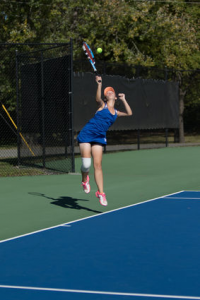 Aly Henneberry reaches for a return at a home tennis match.

On Thursday, October 13, the BHS tennis team traveled to Western Carolina University for a conference tournament. They sure caused a racquet.

Although Tynch and Hooper did not win, they still had a great time cheering on their teammates. “We lost, kind of bad, but it was ok because we had fun and to support our other teammates that didn’t lose badly,”

“We lost, kind of bad, but it was ok because we had fun and got to support our other teammates,” Tynch said.

“I felt really proud,” Henneberry said. Henneberry, Holland, and Shuler are moving on to regional competition.

The Dual Team tournament will take place the last week of October. Tynch, Hooper, Shuler, and Holland will be playing, where the team will continue making a racquet.