by Zaria Abdulkarim and Jacob Miner

Last month, Keith Lamont Scott, a resident of Charlotte, North Carolina, was shot and killed by the Mecklenburg Police. 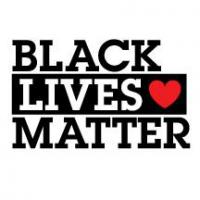 A logo for BLM to show support

Prior to the shooting, he was in his car. According to his family, he was waiting for his son to get back from school when the Charlotte police shot him. Police claimed they were looking for a suspect when Scott stepped out of his car and refused to follow their instructions. Witnesses claim that Scott was holding a book at the time of the shooting, while the police claimed he possessed a gun.

Multiple videos of the shooting came to light after the public demanded evidence of the encounter. One video recorded by his daughter showed his wife yelling to the police. In an interview with CNN, Rakeyia Scott, Keith Scott’s wife, described what she said to the police in the video.

“He doesn’t have a gun,” said Rakeyia Scott. “He has a TBI…[traumatic brain injury]. He is not going to do anything to you guys. He just took his medicine.”

As a result of the shooting death, friends and neighbors started a small protest and took their despair to the streets of Charlotte. From there it grew. Residents of Charlotte quickly heard of the tragedy and decided to show their remorse and solidarity by marching with the family, but remorse quickly morphed into anger.

The first night, protesters chanted, “No justice, no peace.”  Police mostly told protesters to step back, keep back or go home. However, the protests took a violent turn later in the evening. As video filmed by Scott’s daughter, Lyric, showing the moments following the shooting spread on social media, the people of Charlotte and surrounding areas went into the streets of downtown Charlotte and started to riot. There were fights, and some people destroyed and looted buildings. One police officer was hurt.

The following night’s protests were also violent. The people of Charlotte were still very angry and frustrated with the situation. More fights, riots, and looting occurred in downtown Charlotte. The police and SWAT team were on the scene. Dozens of both police and civilians were injured, and one civilian was shot and killed during the protests.

“The environment was tense, the city was on alert of possible riots and looting, given the nights before where businesses were broken into and looted,” said Mohammed Abdulkarim, a protester in Charlotte. “And sadly, a young black man was shot, police officers were injured, which led to the mayor of Charlotte putting the city in a state of emergency and calling the National Guard for more enforcements.”

The third night of protest was more peaceful. People marched uptown chanting, “Hands up! Don’t shoot! Show us the tape!”

That Friday, the city of Charlotte announced they would end their 12 o’clock curfew as long as the protests remained peaceful, and that they did. Groups of people marched together with posters, and they showed the hurt they had been experiencing. People from the Hug Project and others hugged police officers and civilians that were on the scene. They marched for hours, peacefully protesting.

People of all backgrounds came together to march against the death of Keith Scott. Their protests are not only for the pain they feel for Keith Scott; it is also for Trayvon Martin, for Sandra Bland, for Eric Garner, for Michael Brown, and for Terrance Crutcher, all who died in police custody or at the hands of police.

“But there has also been decades of redlining, gentrification, and repression which has developed Charlotte into one of the most segregated and unequal cities in the south,” said Juan Miranda, a UNCG student and activist. “Charlotte is one of the wealthiest cities in the U.S., and yet upward mobility for poor black folks is the the worst of any other big city in America.”

Studies show that in 2015 police killed 102 unarmed African Americans. That number could be much higher due to the fact that they do not report every incident that has occurred. A lot of incidents are not classified as murders due to the fact that officers claim that their actions were in self-defense.  According to Mappingpoliceviolence.org, police officers were charged with a crime in only 10 out of 102 cases in 2015.

FBI director, James Comey stated that the FBI is going to start recording every judicial incident that occurs. They are serious and don’t want incidents like these going unnoticed. Their goal is to better the system for the public and to bring peace back to streets of not just Charlotte, but the United States as a whole.