by Jacob Miner with reporting by Collin Frady and Jace Frisbee

While they were in Indianapolis, they went to multiple FFA sessions with keynote speakers, toured the Fair Oaks Dairy Farm, and even went to a Cole Swindell and Chris Young concert. 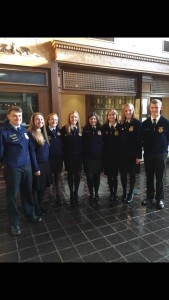 Brevard FFA members pose for a group photo while at the National FFA Convention in Indianapolis.

The FFA (Future Farmers of America) is a youth organization in high schools around the United States. It is the largest youth leadership organization in the world, with more than 620,000 student members in grades 7-12. The FFA program operates on local, state, and national levels. They have a national FFA Convention every year for students all around the country. Students at Brevard High School were able to go and experience the National FFA Convention for themselves.

On October 9, Brevard and Rosman High Schools’ FFA chapters held a fundraiser called “Farm to Fork” to help fund their trip to the national convention. It was their second annual fundraiser and was held at Key Falls Inn in Pisgah Forest. Farm to Fork provided a meal made with locally sourced ingredients such as trout, lamb, and vegetables.

FFA has been fundraising and having conventions for a very long time. FFA was organized nationally in 1928 in Kansas City, and the US Congress granted them a federal charter in 1950.

“First my papaw was in it, my dad was in it, and my brother was in it,” said senior Daniel McJunkin, an FFA Officer at BHS. “So obviously I want to do it to keep that going.”

It is meant for teens to learn how to develop a path to achievement in leadership, personal growth and career success through being educated in agriculture.

FFA has had a major impact on high schoolers not only in Brevard but also across the nation. They continue to help the next generation rise up to meet any challenges ahead of them by helping them develop their own talents and look for their interests in an open range of agricultural pathways that they could take.

FFA classes are not like normal classes. They spend a lot of their class time outside with animals and on the school’s farm, allowing them to have a hands-on experience.

“I’m interested in things that are outside and I don’t like to be cooped up in a classroom,” said McJunkin. “The agricultural classes here at Brevard High School provide a really good way to get out of school during the day and relax and do things on the farm.”