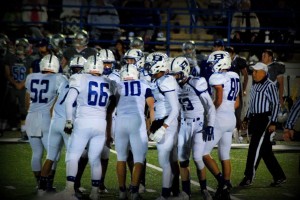 Blue Devils huddle up in their 43-0 win against Smokey Mountain. (photo by Lissa Padgett)

On Friday, November 25, the journey for a state championship ended for the Blue Devils. For the second round of the NCHSAA 2A playoffs, the Brevard Blue Devils (10-2) were set to take on the North Rowan Cavaliers (10-2) at Brevard Memorial Stadium.

It was a big game for both teams going into that Friday night. Both were hungry to advance to the third round.

The game started out slow for both teams offensively. The defense on both teams left both teams scoreless after the first quarter.

The second quarter was definitely a quarter for North Rowan, as they hit a 27-yard field goal with 5:00 left in the 2nd quarter and then stopped the Devils on a quick drive. As soon as they got the ball back, the Cavaliers scored on a 89-yard touchdown pass to Jayden Jones. Their 10-0 lead gave North Rowan all of the momentum going into the second half.

The start of the second half started out slow, just like the first quarter. The Cavaliers hit a 22-yard field goal in the middle of the third quarter to take a 13-0 lead. It was not looking good for the Blue Devils.

North set up for yet another field goal, looking to make the game 16-0, but the Blue Devils’ special teams unit had a different idea. The Blue Devils blocked the field goal and sophomore Luke Ellenberger picked it up and returned it 70 yards for the touchdown. Brevard was now back in the game, making it 7-13.

Only six seconds into the fourth quarter, senior Jesse Lowery caught a 28-yard touchdown pass from senior Tanner Ellenberger, and after the extra point, the Blue Devils took the lead 14-13.

North Rowan stayed composed as Jaleel Webster scored on a 75-yard run for a touchdown on the first play of their drive, giving North a 20-14 lead with 11:00 left in the game.

Quarterback Corbin Smith gave the Cavaliers breathing room after he scored on an 88-yard touchdown run, and after the extra point, the Cavaliers had a commanding 27-14 lead with just under 4:00 to play in the game.

The Blue Devils stayed ready and drove down the field to score on a 2-yard pass from Ellenberger to senior Tanner Pettit.

The Blue Devils failed to recover their own onside kick.

The defense needed to step up and get a stop to give the Blue Devils a chance at winning the game, and that they did.

The game came down to one final play to win it all. Tanner Ellenberger was pressured to run to the right side of the field as he threw a deep pass into the endzone but it was batted down by North Rowan, giving them their first win against the Blue Devils ever.

The Brevard Blue Devils had a fantastic season and are still the Conference champions. They will always be a team to be remembered in Brevard football history.