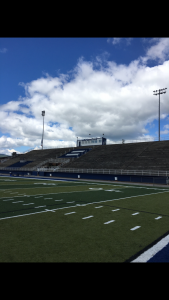 by Jace Frisbee and Jacob Miner with reporting from Collin Frady

In order to be chosen, coaches around western North Carolina vote on players that they feel should be on the All-Conference team. To be on all conference is an honor that shows where hard work and dedication can take an athlete.

The Brevard football program alone had 10 total selections, more than any other team in their conference. Eight out of the 10 players that were chosen for Brevard were seniors Nick Cabe, Tanner Ellenberger, Jace Frisbee, Samuel Kicklighter, Jesse Lowery, Tanner Pettit, Lane Pressley, and Earon Wilkes. The other 2 selections were juniors Ethan Shook and Ari Williams.

These 10 players were leaders for Brevard as they went on to have a very successful season as they won the conference.

Coming from the soccer program, Senior Aaron Neuman, the captain of the varsity soccer team, was selected as an all-conference player as well. He had a fantastic year individually and really caught the eye of the coaches around the conference throughout the season.

BHS is very proud of its fall coaches and athletes this season with their overall success this year.