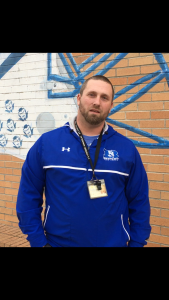 The Brevard Blue Devils have had a rough past couple of years with multiple losing seasons since 2007. The school knew they needed a change, and a change is what came when they hired Craig Pritchett as head coach for the Devils in the 2015-16 season.

As soon as Pritchett came to Brevard, there was an immediate change in the program. He took weight training to a whole new level, pushing the athletes to be the best that they can be. He is always willing to make other players better. From inspirational speeches to talking to athletes one on one, he has turned Brevard football around to be a dominant presence in WNC one again.

These changes are what has lead up to Coach Pritchett receiving the Coach of The Year Award. His discipline, determination, and willingness to succeed are some of the key factors that led the Blue Devils from a 2-9 record last year to a 10-3 record this year.

“I think think the team has surpassed everyone’s expectations this year,” said Pritchett. “We set high goals as a team at our camp and in the preseason.”

There is only one coach of the year award given out in the Blue Devils Conference, and it was only fit that Coach Pritchett was to be the one to receive it.

“It would be a lot better to say coaching staff of the year instead of just one coach of the year,” said Pritchett, “but it is a huge honor.”

The success of the team this year sparked a new interest for not just the school but for the city of Brevard in General. The stadium has been packed full of fans waiting to watch their football team play.

“Thanks to the support of the community and especially the administration and staff in the school,” said Pritchett, “packing the bleachers. You always hear stories about what Brevard used to be like, and we caught a glimpse of it at the end.”