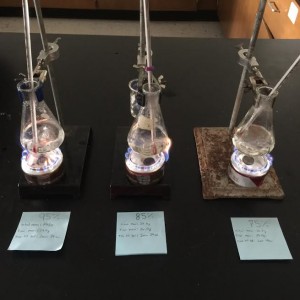 Students create their own heat source to boil water in their AP Environmental Studies class. (photo by Austin Nale)

by Declan Lusk and Aly Henneberry

Renewable energy is energy harnessed from a source that is not depleted when it is used, such as solar or wind power.

Juniors Austin Nale, Bryce Spradlin, and Aiden Spradlin used an ethanol concentration mixed with water and steel wool, and burned it to boil water and create steam, which could then be used to power a turbine. To test each concentration’s potency, they would light the ethanol on fire, place it under a flask of water, and see how long it would take for the water to boil.

Juniors Douglas Grimm and Wesley Pierron created a Darrieus wind turbine, which is significantly different from the average turbine.

“The idea behind a Darrieus wind turbine, or a vertical axis wind turbine, is that you have a lot of surface area hit,” said Grimm, “so that when the fan blades are hit with the burst of wind, the actual axis on which they turn is connected to a motor that will generate electricity, which powers a generator and will eventually power a home.”

Many students found that renewable energy is difficult to replicate in a classroom setting. However, it is cleaner for the environment and can still maintain the efficiency of fossil fuels.

Juniors Ingrid Findlay and Matthew Bailey used biomass to boil water. They chose various varieties of nuts and burned them to heat water.

“We learned that nuts can be used to produce a reliable and clean source of energy,” said Findlay. “Particularly the shells can be burned in mass quantities with improved technology to supply power to different towns.”

“[The Darrieus wind turbine] is a usable source of renewable energy and it definitely has a future,” said Grimm. “Not right now while the technology is still new. The problem is that it needs to be industrial.”