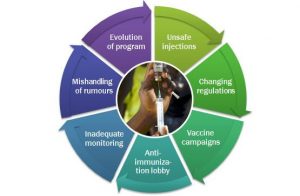 In recent years, the popularity of vaccinating children has decreased significantly. This is due to several factors, one of the most prevalent being the belief amongst parents of young children that vaccines are linked to the development of autism.

Contrary to popular belief, autism is not caused by one specific factor; everyone may be diagnosed differently. Research suggests it typically develops due to either genetic influences, environmental influences, or sometimes both. Despite the recent controversy of vaccination that worried parents have created, according to the Centers for Disease Control and Prevention, numerous scientific evidence supports the statement that there is no link whatsoever between vaccines and the development of autism in children.

The fact that this argument is not supported by any scientific evidence whatsoever deems it more than uncompelling. Additionally, from a logistical standpoint, it is simply irrational to deny children aid in immunity to hundreds of diseases that have killed and maimed millions of people for centuries.

In a WebMD article about the importance of vaccines, Dr. Hansa Bhargava said, “The number of deaths and disease prevented by simple vaccines is astounding and has changed the way we live. Yet, in the past few years, we have seen several outbreaks of measles and other diseases easily prevented by vaccines, mostly within communities and schools where immunizations were not given. This allows serious illnesses to spread freely and take hold, especially among the most vulnerable members of our community like young children.”

Clearly, an abundance of unvaccinated individuals can lead to widespread disease in communities, causing deadly, previously eradicated diseases to resurface and leading to the death and suffering of many people.

Over the past decade, multiple vaccine-related factors have been examined for possible links to autism and the health of children in general. One factor includes the MMR vaccine, or the measles, mumps, and rubella combination vaccine. It is administered to children in two doses, the first given between 12 and 15 months of age and the second given between ages 4 and 6.

Another vaccine-related factor that has been investigated for a link to autism is thimerosal, a mercury-based preservative that has been used in vaccines for decades in the US. Similarly to the MMR vaccine, there is no scientific evidence that thimerosal is linked to autism or any harsh side effects.

“If thimerosal in vaccines were causing autism, we’d expect that diagnoses of autism would decrease dramatically after the chemical was removed from vaccines,” said Dr. Eric Fombonne, director of Montreal Children’s Hospital’s psychiatric division.

In 2001, thimerosal was removed from all vaccines in California. Studies confirmed that autism rates in California actually increased rather than decreased after this event.

“Not only did cases not decrease, but they continued to rise after thimerosal was removed,” said Dr. Fombonne. “This tells us that something else must be responsible for rising rates of autism in this country.”

Vaccines do not cause autism in children and are not harmful in any way. Vaccination is completely safe and necessary to assure the health of families and communities around the world by greatly reducing the likelihood of localized outbreaks and worldwide epidemics. When deciding whether or not to allow children to receive vaccines, parents must take into account their child’s future as well as the safety of other people and their community.